Equity markets slumped in the second half of the month after central bankers from around the world reaffirmed their commitment to tackling inflation through higher interest rates at the Jackson Hole Economic Symposium. The hawkish stance implies further rate hikes which would ripple through the global economy slowing consumption and borrowing. Some analysts expect the Bank of Canada will maintain a policy interest rate of 3.25% after the most recent rate increase of 0.75%. A rate above 3% is generally considered ‘restrictive’ by economists.

Concerns about the economic outlook have been putting negative pressure on oil prices since mid‐year, with a barrel of Brent crude now trading near US$95 down ~25% from the 2022 high. A possible revival of the Iranian nuclear deal could bring additional supply back to the global market, reducing the likelihood that oil prices will test new highs. The president of OPEC, Bruno Itoua, echoed comments that the organization could cut their output if they see prices falling to unfavourable levels given weaker demand or greater supply.

The US Securities and Exchange Commission (SEC) announced a preliminary deal with Chinese regulators allowing American accountants to audit records of Chinese companies listed on US exchanges. SEC Chairman, Gary Gensler, had threatened to delist more than 200 US‐listed Chinese companies from the exchanges if they did not provide more transparency. The delisting would include notable stocks like Alibaba, Tencent, JD.com, and Pinduoduo.

Supplies of global iron ore and steel are forecasted to grow faster than demand over the next six months, leading to a build of inventories. China, the world’s largest consumer of iron and steel, removed government‐mandated cutbacks on steel production while property sales and construction in the country continues to slow. In relation to the forecast, we trimmed our position in Nucor Co (NUE) to shelter some profits and reduce exposure to volatile materials prices.

Food price risks remain skewed to the upside, despite an agreement signed by Russia and Ukraine to restart exports of grains from Ukraine which were being blocked by Russian forces. Due to the ongoing conflict, Ukrainian grain harvests are expected to fall nearly 42% compared to the previous year. Prices for natural gas used in fertilizer production remain elevated, putting further upward pressure on costs.

Three aspects of the Canadian and US economies could provide support over the next 12 months: 1) A high number of job vacancies; 2) Significant disposable personal income; 3) Strong central bank credibility. Inflation appears to be moderating in both countries while the unemployment rate has remained relatively flat.

All returns are for the reported month and in local‐currency.
All data sourced from SIACharts and FACTSET. 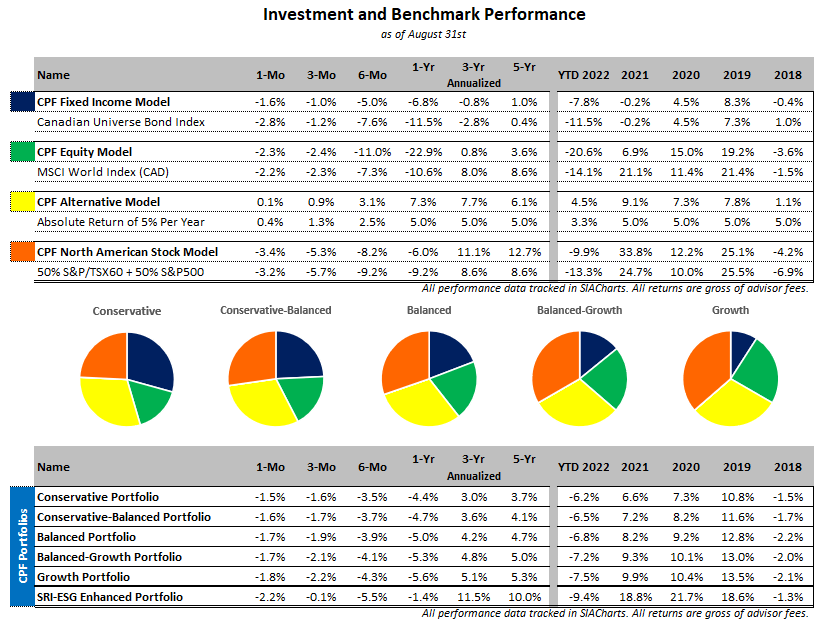 Get Updates & Insights Delivered to Your Inbox

Get Updates & Insights Delivered to Your Inbox